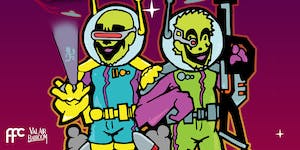 The founders of Psychopathic Records and perhaps the most notorious and controversial rap duo in the history of music, ICP rose from being scrubs on the streets of Detroit to becoming bona-fide pop culture icons and Gold and Platinum-selling recording artists. Through sheer hard work and determination, ICP has created a complete entertainment empire, including music, movies, sports entertainment (Juggalo Championship Wrestling), groundbreaking music videos, and one of America’s longest-running underground music festivals, the Gathering of the Juggalos. Far beyond a rap group, ICP has proven themselves to be a worldwide phenomenon that will never be forgotten.